Will you help save one of Reston’s architectural treasures?

Reston’s American Press Institute (API) building is under the threat of
demolition.


A local developer has submitted an application for rezoning the property in
order to build townhouses and condos. He’s not interested in adaptive reuse of
the historical and architecturally significant building, which is located at
11690 Sunrise Valley Drive.

A local petition has been signed by more than 1,518 individuals, representing
Reston, the rest of Fairfax County and Virginia, 39 other U.S. states and
territories, and dozens of countries around the world. We encourage you to sign
it:

The API building is the only building in Virginia designed by the
internationally acclaimed architect Marcel Breuer, a master of Modernism.
Breuer also designed the Whitney Museum of American Art (now the Met Breuer) in
New York City, UNESCO Headquarters in Paris, the U.S. Embassy in The
Hague/Netherlands, and the HUD, Robert C. Weaver and Hubert Humphrey buildings
in Washington, D.C. Many of his buildings are on the National Register of
Historic Places. 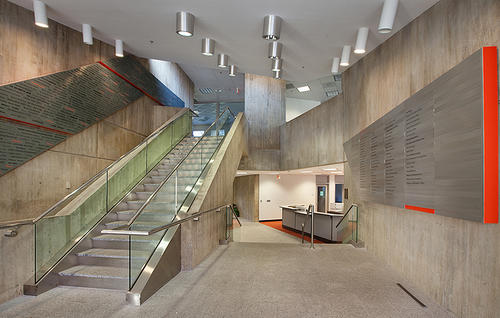 In
addition to its architecture, the building also has historical significance:
Tens of thousands of journalists and newsmedia executives — representing a “Who’s Who in Journalism” — attended
leadership seminars, conferences and industry summits in the nonprofit’s
headquarters from 1974 to 2012. It was the showcase of North American newsmedia
training.

In addition to signatures, a distinguished coalition is growing, including the
Reston Citizens Association, American Institute of Architects (as well as its
Virginia and Northern Virginia organizations), Fairfax County Architectural
Review Board, Fairfax County History Commission, and Commonwealth of Virginia
Department of Historic Resources. (Please
see the petition for the complete list of supporters.) Add to that citizens,
community leaders, architects, historians and preservationists, journalists and
other newsmedia executives across North America, former staff, and others who
believe that Breuer’s building should be preserved.

The Fairfax County Board of Supervisors soon will hold a public hearing on the
developer’s application. (Meeting date: TBD). We encourage you to sign the
petition now, so that all signatures can be shared with the supervisors in
advance of the meeting.

Please help us save the API building. It deserves a second life, not a
demolition permit.