All,
As a member of the RestonTransportation Service District Advisory Board (RTSDAB), I attended its
March 29 meeting. RTSDAB’s role is to review and advise Fairfax County on the tax
rate for the new Transit Service Area (TSA) tax that residents start paying in 2018.
This was a public meeting, and I can share the details.
The County provided and elaborated on a handout on Reston
Development and Transportation Projects. We were informed that the handout will
be posted on a Fairfax government site soon, but I thought to inform the
community about some highlights:
The country reported major (high-rise) “construction
deliveries” of 1,616 rental residential units between 2015 and 2017, capable of
housing about 3,000 new Reston residents.
These numbers do not include the 531 rental units (and expected 1,000
new residents) that recently came online with the opening of the Signature
complex.  In addition, the County reported
that there are another 1,600 residential rental units (Signature
included?) in the construction pipeline. This could mean as many as 7000 new
residents.
However, these new units are not filling up very fast: The
county stated that Reston’s residential rental vacancy rate is currently 45%. (Some
in our group questioned this figure, but the county confirmed their estimate.) Such
a high vacancy rate can have a serious impact on the marketability of condominiums
and HOA townhouses, depressing prices and increasing time-on-market. It also
implies that the increase demand on our infrastructure, roads, schools,
libraries, parks… has yet to be felt.
We also heard that the pedestrian skywalk from Reston Town
Center to the new Reston Station will not be in place when the station opens. It
is currently planned to be included in Phase II of the Reston Gateway project. Those
of us living in and around Town Center will have to either walk along Reston Parkway
or Fairfax County Parkway, across the toll road, and then along Sunrise Valley
Drive to the station. This will be almost as far as walking to the Wiehle station.
I’m awaiting a response to my request for the status of the overpass
construction and a projected implementation date.
A presentation slide provided a summary of both approved and
pending Development Totals. I found this slide difficult to parse. It seems to indicate
that the county projects a 61% increase in both total square footage and units
(residential and commercial combined) after the in-process rezoning
applications are approved and a 294% increase in both total square footage and
units if all pending applications are approved. I suspect that these percentage
increases are only for the TSA area. Nevertheless, this is a staggering
increase and further explanations are necessary. The slide will be available
when the county posts the presentation on their website.   I’ve included an image of the summary slide
below. Many of us attended a more detailed county briefing on the projected
increases about six months ago, where similar increases were projected.
There was some good news: The county hasn’t recommended an
increase in the 2.1 cent TSA residential tax rate. The county also provided an
update on the status of transportation projects. Significant project delays were
not apparent or highlighted. Interested parties should look at the presentation
when it is uploaded. When the County link becomes available, we’ll add it here
and say “updated on x date. “
On the traffic analysis front, someone asked if the county
has begun studying the actual traffic impact of the new construction. The
county responded that a study is being considered.
The next meeting of the RTSDAB is scheduled for Thursday,
April 5 at the Lake Anne Community Center at 7:00 PM. The RTSDAB will formally
vote on a TSA tax rate recommendation for the County.
Hank Schonzeit
RCA Board Member 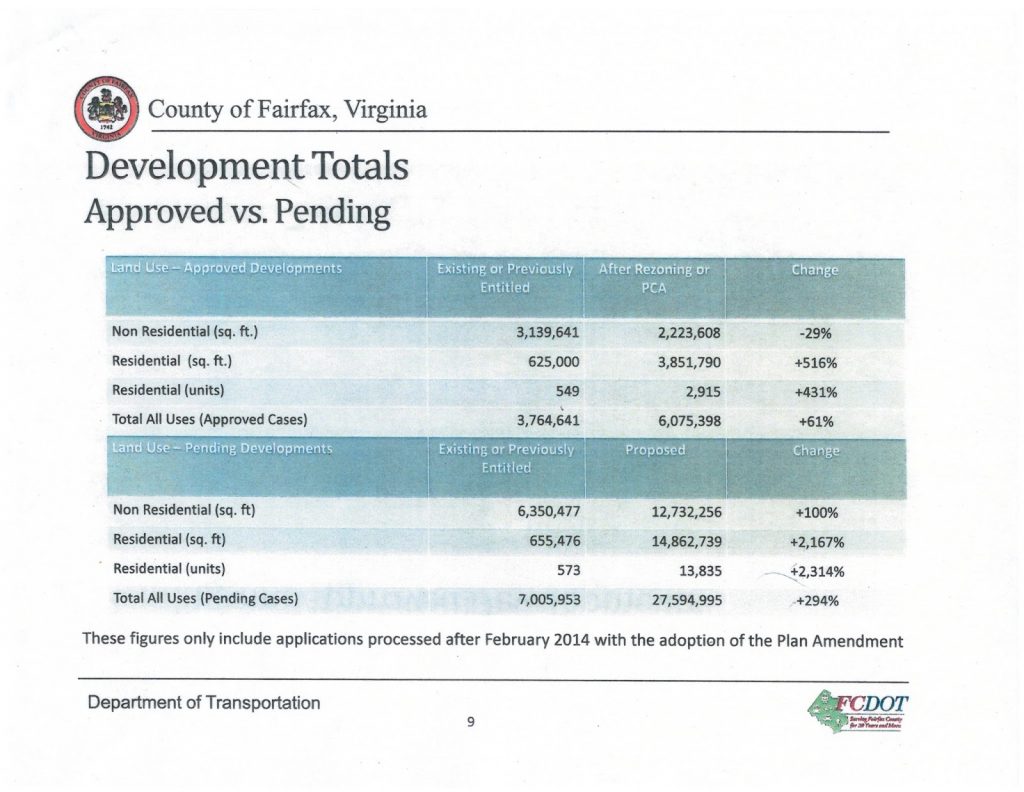