A Great RCA Evening Honoring Rescue Reston and its Supporters

Over 100 people attend gala event including
Reston and Fairfax County luminaries
By Sridhar Ganesan, President, RCA
Greetings!  Hope you enjoyed the spring and summer like
weather that we have been getting recently.

On Sunday, April
24, 2016, Reston Citizens Association (RCA) was proud to present the 2015
Citizen(s) of the Year award to a very deserving recipient – Rescue Reston (RR)
organization and its 6000+ supporters. 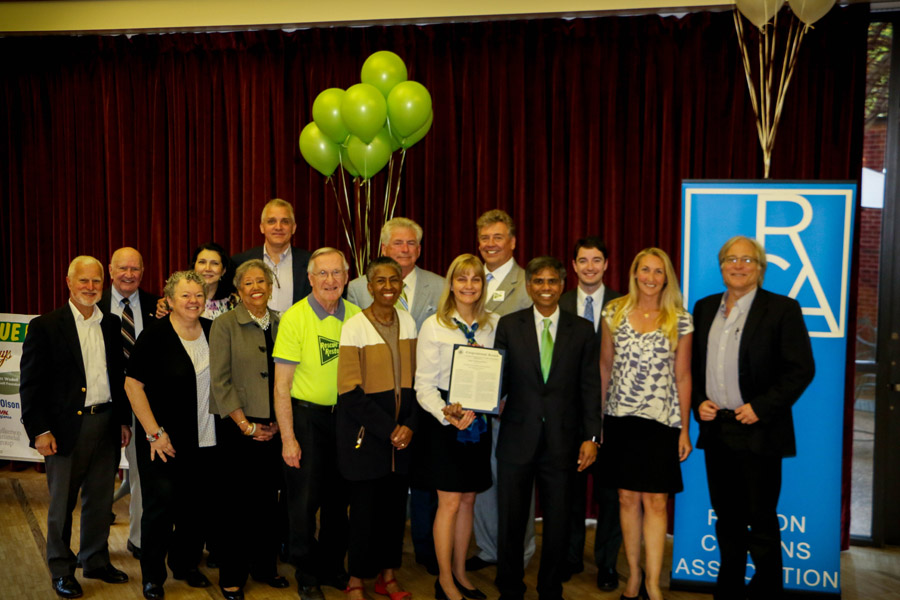 After my opening
remarks, Mr. McCrea, long-time Reston golf course resident and President of
Reston firm Achieve-it, LLC, described
why he nominated Rescue Reston. He was followed by Ms. Hudgins; Mr. Plum; Alex Robbins,
Fairfax Outreach Representative for Congressman Gerry Connolly, Mr. Thompson,
and Ms. Graves.
While US Rep Gerry
Connolly could not attend the event, in his entry of RR’s award into the
Congressional Record, he said, “It is fitting that this award is given by one
grassroots organization to another. It speaks yet again to the legacy that the
founder of Reston, Robert E. Simon, leaves behind. I believe that such a high
level of engagement is one of the best indicators of a healthy and vibrant
community.”
I presented the
award to RR board members – Lisa White, Robin Hogan, Ray Wedell, John Pinkman,
a co-founder of RR, and Connie Hartke, President – who also invited the
audience to join in on this honor.  Mr. Pinkman
and Ms. Hartke made acceptance speeches.

Reston Connection newspaper has
reported extensively on the event and it can be read here – “Thousands Become Citizen of the Year.”  From
my perspective, while there was much to celebrate in how the community came
together as one voice to preserve the golf course as open green space, what
struck me was the excellent collaboration between all the different local and
County organizations involved (the County, RA, RCA and RR).  The golf course fight represents a great
example of what can be accomplished by working together.
Citizen of the Year Award
Since 1976, RCA
has named a Restonian as Citizen of the Year. The Citizen of the Year event is
our signature public event of the year, when we take the time to celebrate the
citizens who have contributed to Reston above and beyond what was expected of
them.  Through this award, we spotlight
the work of dedicated citizen volunteers and civic activists who work
tirelessly behind the scenes. They are the heroes who have made Reston what it
is and represent the best of Reston’s values.
We called for
nominations from the public early February 2016 and received names of several
very qualified nominees, thus making it a difficult choice as it always is.  The Citizen of the Year Committee of our
Board then went through a process, following which the RCA Board picked the
Citizen of the Year.  This was done after
we weighed a variety of factors – among others, whether the awardee’s efforts
had enhanced the quality of life in Reston and whether they were consistent
with Reston’s planning principles, vision and RCA’s goals.  And we looked at outcomes as well.
This year’s citizen
of the year was different in one way – we chose a unique recipient – Rescue Reston
and its supporters, the first time we have chosen a group of citizens and an
organization.
Rescue Reston was
founded in August 2012 specifically to challenge a potential proposal to have Reston’s
only public golf course rezoned for residential development.
It started with
three people, who mobilized hundreds of activists and it is now a 6,000-member
strong organization.  Its supporters were
galvanized to fight an appeals process in front of the Fairfax County Board of
Zoning Appeals (BZA) initially.  Then the
organization and support base expanded and strengthened as a legal process
unfolded. Fairfax County, Supervisor Hudgins, RA and Recue Reston were great
partners in the fight, with Rescue Reston leading the charge from a public
perspective.
·      Hundreds of people attended
rallies, a variety of local organizations joined the fight including environmental
groups.
·     Thousands contributed funds
to support legal costs as the process wound through the courts.
·  Over 500 people showed up
to show support and comment at the BZA meeting in which Fairfax County, RA and RR
attorneys presented evidence that the golf course land use designation is
permanent open green space.
·    Critically, Rescue Reston
researched and found incontrovertible historical documents that supported the
open green space designation for the golf course.
The Rescue Reston
website (http://rescuereston.org) and press reports detail the chronology of events and what
transpired, but as things stand the coordinated efforts resulted in the Fairfax
County Circuit Court requiring the golf course owners to file a plan with the
Fairfax County for any proposed redevelopment.
They must follow the same County process for a land use change as any
other landowner.
The golf course
owners, RN Golf Management, have decided not to pursue an appeal to the
Virginia Supreme Court against the Circuit Court ruling.
This outcome was a
great result and many thanks from RCA to Rescue Reston members and leadership for
uniting thousands of citizens and many of the leading organizations, and
fighting on our behalf for a great public common good for the Reston community.
We anticipated a
well-attended event last Sunday and we were not disappointed.  Any event like this one cannot be held
without the support of a lot of people.
The JBG Companies, the property
developer that is expanding Reston Heights “in a location” that we would want a
developer to build (north of Sunrise Valley Drive, opposite the golf course as
opposed to on it, J) was a
significant contributor.  Local companies
that supported us also include National
Realty, a premier Northern Virginia real estate agency, and Bleevit Interactive, a company that provides
web-design, search-engine optimization and social media services.
Area grocery
chains also supported the event strongly – Wegman’s of Fairfax, Harris Teeter
and Safeway of Reston.
And not least of
all, many thanks for direct donations from the public as well as from directors
of RCA and RR to help make this event possible.

A lot of people
worked long days and hours to make this happen.
My thanks to RCA’s Citizen of the Year Committee – Hank Schonzeit, Geoff
Lewis, Lynne Mulston and especially the Chair, John Hanley, but for whose
tireless work from January of this year, we would have been hard pressed to
have gone through the process and ultimately actually host an event.  I am grateful to Jacqueline Carr Photography for
great pictures (view here)
and South Lakes High School students Madison Evans, Kathryn Becker, Lindsey
Daniels, and Kahlil Dover for their cheerful and enthusiastic help.
Finally, of course,
thank you to the members of the public and all the community leaders for attending
and making it a memorable and successful event.